The Science of Sailing Part 1

Ships that are partly or wholly dependent on the wind for their propulsion are unique in the sense that fluid dynamics plays a vital role in their design. Both aerodynamics and hydrodynamics, the science of the motion of air and water around bodies, determine the speed potential of a sailing craft. The flow of the wind around the sails, together with sail area, sail disposition and sail shape, determine the level of the propulsive force while the flow of water around the hull and the hull appendages, together with their size and shape, determine the level of the force resisting forward motion, and the force resisting sideways drift caused by the wind on the sails.

“The Attainable Speed Under sail”

Part 1 consists of Chapters 1 through 4. Chapter 1 is an introduction to the collected work. Chapter 2 provides a review of basic notions and considerations which readers with a formal training in naval architecture and in aero and hydrodynamics, may skip over. This chapter describes first of all the scientific method which lies at the base of all science since the days of Isaac Newton. The nature of mathematical formulae and how these are typically derived is then addressed followed by a summary of the basic mathematical functions utilized to form such formulae. The building of mathematical models and algorithms is described, followed by a portrayal of the physical quantities we work with, their dimension, and the units we have given to them. The concept and use of non-dimensional coefficients and numbers is reviewed and a description is given of the properties of air and water – the two mediums in which a sailing vessel, at the interface between the two, operates. Chapters 3 and 4 provide a description of the basic speed-producing factors for sailing craft that can be derived from setting the resultant aerodynamic force equal and opposite to the resultant hydrodynamic force. These two overall forces must be in equilibrium when a wind-driven vessel is sailing along a straight course at constant speed in a steady wind, when the sails are efficiently trimmed and the rudder is set at a steady helm angle. Some important conclusions can be derived from this basic equilibrium condition and these two chapters present these, utilizing some assumptions which, in later chapters, are further validated. The mathematical treatment of Chapter 4 is particularly developed for the purpose of showing the degree to which the speed of wind-driven craft is dependent on the aerodynamic lift and drag forces acting on the above-water parts of the vessel and the hydrodynamic lift and drag forces acting on the below-water hull and appendages. This chapter “sets the scene” for the following chapters that deal with the many aspects of fluid-dynamic lift and drag.

A synopsis of the contents of Chapters 2, 3 and 4 is given below.

This chapter presents some preliminary notions, of a physical and mathematical nature, of importance for some of the subject matter of later chapters. The first of these concern the principle of the scientific method, which lies at the basis of all science since the days of Isaac Newton. The need to adhere to the scientific method is explained. The concept of a mathematical formula expressing the relationship between variables associated with some phenomena or property is described, as are the basic mathematical functions adopted for specifying a particular relationship. The way formulae and functions are combined to generate a mathematical model is explained. For practical application of formulae and mathematical expressions we need to define dimensions and units. The International System of units are adhered to in this book and the main elements thereof are described. Some expressions are non-dimensional which renders them applicable in any consistent and coherent set of units. Non-dimensional coefficients and expressions are used for categorization of important behavioural and geometrical characteristics, and natural phenomena. Extensive use has been made thereof and the pertinent expressions are defined. Finally, the important properties of air and water, the two media we are concerned with most, are described.

Chapter 3: The Velocities and Forces that Define Sailing Performance

This chapter deals with some of the fundamental aspects of sailing and defines, on the basis of the mathematical relationships involved in the equilibrium between the aerodynamic and hydrodynamic forces, the basic velocities and forces. This is preceded by sections in which the aerodynamic forces that are generated by the wind flowing along the sails, and the hydrodynamic forces exerted on the hull and its appendages when the hull is driven through the water, are defined. The concepts of drift and leeway are defined as are the aerodynamic forces dependent on wind velocity (speed and direction) and the hydrodynamic forces dependent on the velocity of the hull through the water (speed and leeway angle). A steady speed is reached when the resultant aerodynamic forces acting on the above-water hull is in equilibrium with the resultant hydrodynamic forces acting on the below-water hull. When the wind is constant, in terms of speed and direction, and the sails are set and trimmed, equilibrium is reached and the vessel reaches a specific velocity. Useful relationships between the various factors are derived from this equilibrium condition. Sailing vessels need to adopt a course at some angle to the direction of the wind in order for the sails to develop thrust. The ability of a sailing vessel to work itself to windward – directly into the wind – is expressed by the so-called speed made good. The definition of this speed is provided.

In this chapter, as a prelude to the following chapters on the aero– and hydrodynamic forces acting on sailing craft, a derivation is given of a set of equations which reveal the role of the respective lift and drag forces in setting limits to the attainable speed that various types of sailing craft are capable of. These equations are derived from the equilibrium equations presented in Chapter 3, and the kinematic relations between ship speed, true and apparent wind speed, and true and apparent wind angle. The detailed derivation is given. The process results in equations for the attainable speed made good as a fraction of ship speed, the attainable ship speed as a fraction of true wind speed, and the attainable speed made good as a fraction of true wind speed. Graphical representations of the equations derived, depicting the value of the maximum speed under sail, are provided together with an interpretation of the trends shown. These equations show that sailing speed is dependent on just 2 parameters, viz. the sum of the aero and hydrodynamic drag angles, and the value of the resultant hydrodynamic “force–area” divided by the resultant aerodynamic “force–area” – the quantity dubbed as the force–area ratio of sailing.

Data on the value of the aero and hydrodynamic drag angles and the force–area ratio for various types of sailing craft ranging from the square–rigged clipper ship “Stad Amsterdam”, to “Greenbird”, the land yacht that broke the world speed record for a vehicle propelled by sails in 2009 are then presented and discussed. The collection of such data provides for some meaningful observations.

This chapter first addresses some geometrical and mathematical properties of the velocity triangle and its circumcircle – the triangle formed by the true and apparent wind speed vectors, and the ship speed vector. 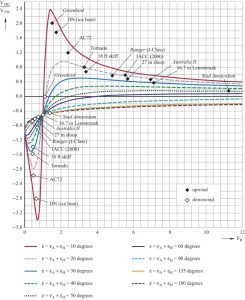 Figure 4.29: Plot of the attainable speed made good as a fraction of true wind speed for different sailing craft.

Attention! If you wish to order from outside the Netherlands OR more than one book please use this form.